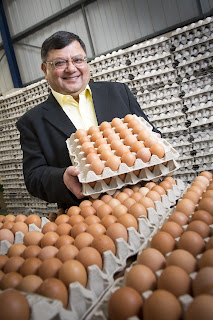 The company, founded by Pankaj Pancholi in June 2003, supplies its products across the UK to major retailers, sandwich makers, Scotch egg manufacturers, and the pickling trade – with up to 1.5 million eggs going through its doors every week.

Just Egg aims to be at the forefront of developments in the industry and, when it launched, it was the first company in the UK to use a new and different type of machine to hard boil, peel and pack eggs.

It was the first to introduce ready-to-eat twin hard-boiled egg packs for the retail market, and the first to pack eggs to trade customers in sealed bags in cardboard containers to replace buckets, which reduces waste and saves cost, said Pankaj.

Now the firm, based at Hilltop Road, Hamilton Industrial Park, Leicester, is hoping to continue its diversification by launching single hard-boiled egg packs into supermarkets later this year, as it celebrates ten years of operation.

“Just Egg Ltd has become what I believe is well placed in the hard-boiled egg and egg mayonnaise industry in the UK,” said Pankaj, a microbiologist by trade who has worked in the egg industry for more than 25 years.

“When I launched Just Egg in 2003, we had no customers. I employed 12 staff and I trained them from scratch. We now employ 24 people, and some of them have been with us since day one.

“We’re excited to be celebrating our tenth anniversary, and are currently working on plans to increase our range and develop new products as we move into the next chapter.”

In addition to boiling and peeling more than 1.25 million eggs every week, the company also manufactures over three tonnes of egg mayonnaise daily in its purpose-built BRC-approved factory.

The company supplies its products to a major retailer, sandwich manufacturers, the pickling trade and whoever uses hard-boiled eggs.

“Over all the years I always thought that hard-boiled eggs could be sold in supermarkets, as a ready convenient nutritious food. That was how the twin pack hard-boiled egg was born and now it is in one of the key supermarkets under their own label and also under the Just Egg label in various convenience stores throughout the country. Continuing on the success of the twin pack hard-boiled egg, the single egg pack has been developed for garage forecourts, hospitals and airline caterers and for the ‘food to go areas’ in any convenience stores,” added Pankaj.

Last year Pankaj, who is managing director of Just Egg, teamed up with scientists at the University of Leicester to help develop a process to recycle egg shells and turn them into fillers for plastics. Funded by the Food and Drink iNet, the project has proved the technology and Pankaj hopes that one day his hard-boiled eggs will be packaged in containers that were made from plastic that contains recycled egg shells.

Just Egg Ltd has won a number of awards over the past ten years including the Most Innovative Collaboration at the 2012 Food and Drink iNet Innovation Awards for the work it carried out with the University of Leicester on egg shell recycling, and company of the year in the 2005 Leicester Asian Business Awards.