Golfers get in the swing of fundraising with Focus Consultants 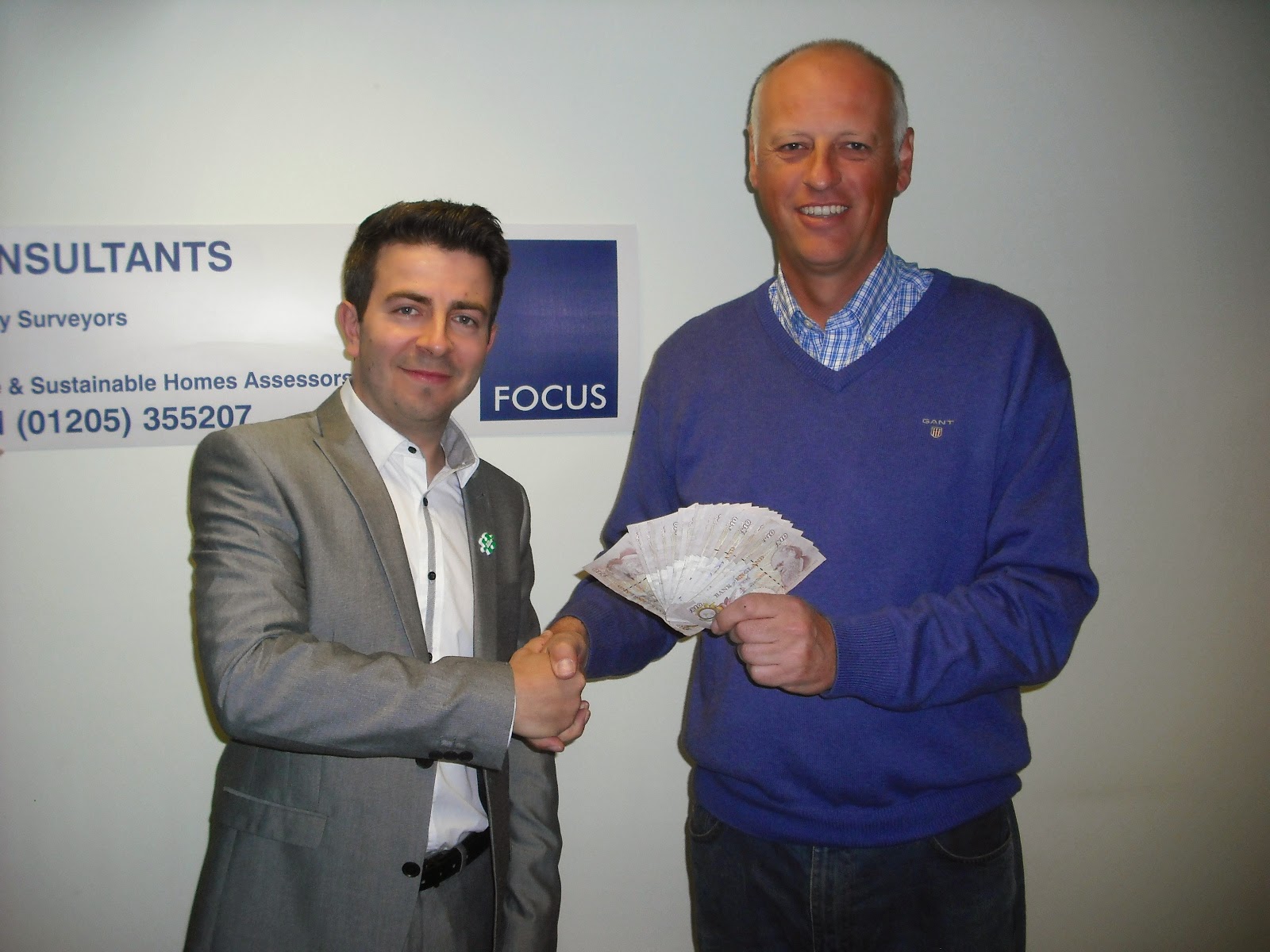 A £250 cheque has been handed to charity following an annual golf day staged by Focus Consultants.
The company, which specialises in funding and economic development, project management, chartered surveying and energy, staged the event at Belton Park Golf Club in Grantham.
Players donated £250 in the raffle, and the proceeds were presented by Focus Partner Trevor Newton to Jamie Davenport from Macmillan Cancer Support to help fund Macmillan nurses.
Trevor, who is based in the Boston office of Focus, organised the event along with Associate Craig Gould, who is based at the company’s Nottingham headquarters.
The event, which has become an annual date on the Focus Consultants’ calendar, attracted players from across the East Midlands. Twenty seven clients, associates and staff took part in the charity day.
Trevor said: “It was great to see so many clients at our charity golf day, and I am very pleased that we have been able to support the very valuable work carried out by Macmillan nurses with our donation to charity.”
Focus Consultants, which has offices in Nottingham, Leicester, Boston and Aubourn in Lincolnshire, and in Holborn, London, specialises in funding, research and economic development, project and programme management, construction and property services and energy services. The company works on private and public projects across the UK.
More than two million people are living with or beyond cancer in the UK today.This figure will rise to four million by 2030. An estimated 27,927 people are living with cancer in Lincolnshire today, and every year approximately 3,800 people are diagnosed with cancer in the county.
Macmillan Cancer Support’s Jamie Davenport said: “We are very grateful for the donation from Focus Consultants. £27 could pay for a Macmillan nurse for an hour, helping patients and their families receive essential medical, practical and emotional support that prevents people feeling like they’re facing cancer alone.”
Focus chose to raise money for Macmillan Cancer Support as the charity is currently providing support to a colleague and family.
If you or someone you know is affected by cancer please call free on 0808 808 0000.

Visit www.focus-consultants.co.uk for more information about Focus Consultants, which is based at Phoenix Business Park, Nottingham, with offices at Holburn in London, Princess Road East, Leicester, Endeavour Park, Boston, and Manor Farm, Aubourn near Lincoln.

Civil and structural engineer BSP Consulting has been praised for the way it tackled the downturn in the construction industry and has been rewarded with an accolade for its efforts. 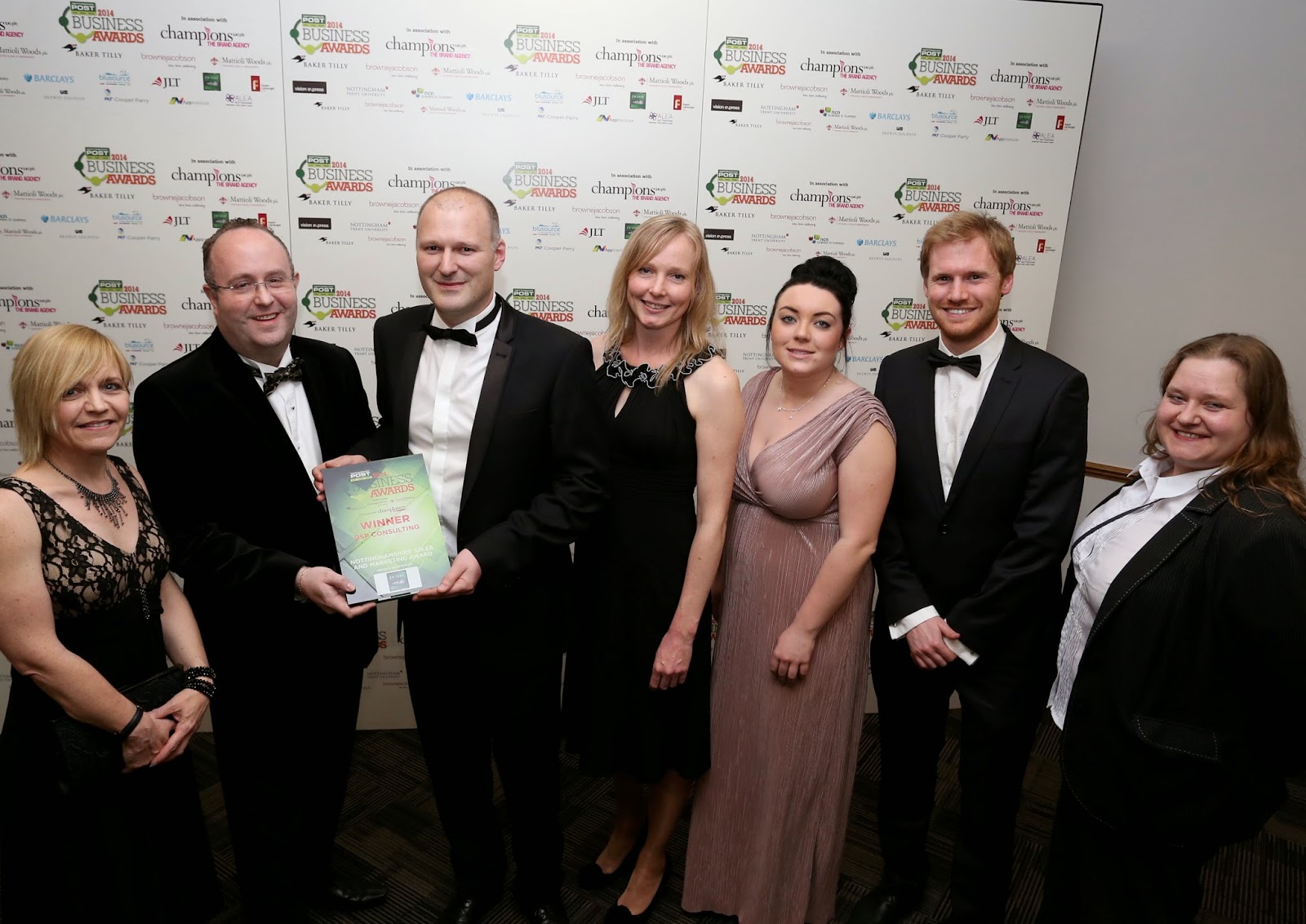 The East Midlands-based company re-shaped its strategy to spread the risk across different sectors and avoid having all its eggs in one basket during tough times. This approach has led to the firm winning an award in the Nottingham Post Business Awards 2014.

The judges praised the way that East Midlands-based BSP had developed a marketing push to widen its customer base, which left the business well-placed to make the most of the upturn in the economy.

Business development director Jef Todd said: “When the downturn hit we had two choices – sit back and let it happen or get out and fight. We decided to spread the risk and move into different sectors, investing in marketing when other people weren’t. It took dedication and the passion of the management and the staff working together to achieve progress. And it proved to be a winning formula.

“We were absolutely thrilled to win the award, at what is one of the region’s most high profile awards ceremonies.”

As a result of its strategy, BSP Consulting increased its share of work in the rail, education and primary care sectors. Recent contracts include projects at Brooksby Melton College, Loughborough University and at Network Rail’s Super Depot in Derby. This complements the work that the firm carries out in the housing, retail and commercial sectors.

BSP, which has its headquarters in Nottingham and branches in Derby, Leicester and Sheffield, is celebrating its 15th anniversary in 2014. The company employs around 50 staff, and operates across the UK. Earlier this year, it announced its first overseas contracts on projects in Kurdistan.

“We were very proud to be alongside two household names – Hillarys Blinds and Trent Bridge Cricket Club – as finalists in the Nottinghamshire Sales and Marketing Award at the Nottingham Post Business Awards, and delighted that we beat off such strong competition to take the title,” said Jef Todd.

The awards were presented at East Midlands Conference Centre in Nottingham. The Sales and Marketing Award was handed to BSP Consulting by Lasse Hogberg, of De Vere Venues, who sponsored the award.

BSP Consulting provides a comprehensive range of consultancy services in civil, structural, geotechnical, transportation and environmental engineering to all sectors of the construction community, from architects, project managers and contractors to developers and estate agents.

Croots Farm Shop in Derbyshire is to introduce a weekly fresh fish special event as part of its expansion plans.

The farm shop near Duffield is launching Croots Fresh Fish Thursdays, with all sorts of fish and seafood on sale – direct from Grimsby Fish Docks.

Starting from Thursday May 8th and running each Thursday between 10am and 4pm, the new service coincides with Croots opening seven days a week and extending its Sunday opening hours as a result of customer demand.

“We asked our customers if they’d be interested in fresh fish and seafood, and the answer was a resounding ‘yes’ so we’re very pleased to be teaming up with Shaun’s Fish Lincolnshire to offer his range of fish and seafood – direct from Grimsby Fish Dock - once a week on a Thursday,” said Steve Croot, who runs the farm shop at Farnah House Farm, Wirksworth Road.

Croots Farm Shop recently announced it was expanding to open seven days a week after previously being closed on Mondays since the farm shop launched in 2008.

The farm shop sells products from more than 40 producers from within a 50-mile radius, as well as items from further afield. It is renowned for its high quality sausages and meat products which are made in house.

It has won a number of Great Taste Awards, which are regarded as the ‘Oscars’ of the fine food industry, and was a runner-up in the Best UK Independent Food Retailer 2010 category of the Observer Food Monthly Awards and named in The Independent’s top 50 best food shops the year before.

Earlier this year, owner Steve Croot was given the accolade of Derbyshire Local Food Hero 2014 at the Derbyshire Food and Drink Awards.

From May 5th, Croots Farm Shop will be open every day from 9am to 5pm (Shires Eatery until 4.30pm). Croots Fresh Fish Thursdays will take place between 10am and 4pm on Thursdays. 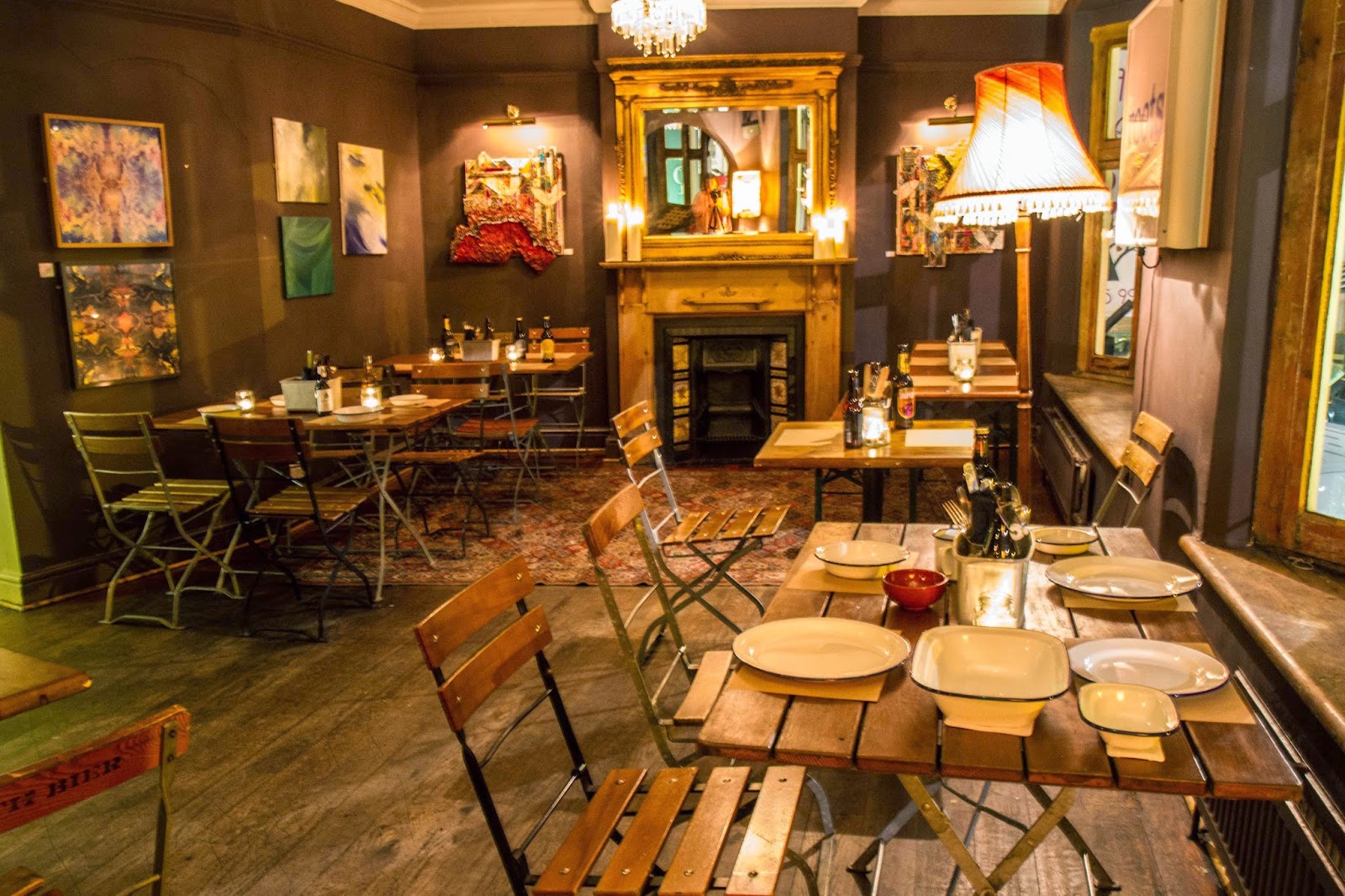 A pop-up restaurant in Leicester has been so successful that now it’s to become a permanent venue on the city’s dining scene.
The Smokehouse opened above the O bar in Braunstone Gate for four weeks towards the end of last year. The exciting culinary concept brought a unique style of Southern-American inspired smoked food to Leicester and received rave reviews.
It re-opened its doors in February as a pop-up as a result of popular demand.
Now owners of The Orange Tree Group, who run the O bar, have decided that The Smokehouse will become a permanent fixture in the area, after receiving so much positive feedback.
“Customers have really voted with their feet, so we’ve opted to keep The Smokehouse open, which we hope will add to the regeneration of Braunstone Gate and the West End area,” said Orange Tree Group director Ben Hings.
“We’ve been delighted to hear how much customers have enjoyed eating at The Smokehouse, and so pleased that they have continued to support this new venture, which we feel is something unique on the Leicester dining scene.”
Chef Liam Watson has developed a menu that includes a range of smoked food, created using an authentic grill imported from the States, with some meats smoked for up to 14 hours.
So far, he’s served up more than 1,200 main dishes, or ‘big smokes’ as they are referred to on the menu. Fourteen-hour pulled pork has proved to be the most popular main dish listing.
As far as side dishes go, mashed potatoes topped with garlic and chive butter has proved a winner with customers tucking into almost 400 portions. And when it comes to puddings, it’s the sticky toffee and maple pudding served with salted caramel bourbon sauce which has been most popular.
A selection of craft beers is being served up to complement the dishes.
Liam has now been joined by a sous chef in the kitchen after the decision was made to keep The Smokehouse open permanently.
“The Smokehouse is a new concept for Leicester and I’m really pleased that the feedback we’ve received from diners has been so positive,” said Liam, who has experience of working in rosette standard kitchens.
The news that the venue is to become permanent coincides with Westival – the music street festival taking place on Sunday May 4th on Braunstone Gate. Organised by pubs, bars, restaurants and businesses in the West End, it is being held for the first time and aims to encourage crowds to the area. It will feature stalls, bands and other entertainments, and has been funded through Leicester City Council’s Gateway Improvement Scheme.
Liam will be running a Smokehouse stall at the event, selling a selection of favourite dishes. He will also be at Leicester’s Summer Food and Drink Festival at Leicester Market on 25 May.
The O bar is part of the independent Orange Tree Group of pubs and bars in Leicester, which also runs The Orange Tree in High Street, The Lansdowne in London Road, and The Basement in Wellington Street. It also operates The Orange Tree and The Kelso in Loughborough, as well as The Orange Tree in Nottingham.
The (Pop up) Smokehouse @ The O bar received a string of rave reviews when it opened first time round.
Leicester food blogger Tim Burke said: “Here was very good, down-to-earth flavour-led food at fair prices...You should try it while it’s here. I’m certainly going back.”
Customer Emma Rees said: “Outstanding food and brilliant service - tastiest food we've eaten in ages.”
Customer Emily Horwill said: “The food was AWESOME! Really good value for money.”
Customer Karen Cheesman said: “Had a meal here last night, one word FANTASTIC!!”
Comments shortly after it opened in February included the following:
“I think that the American barbecue theme worked perfectly here, the concept was a very good one and the food tasted wonderful.” Blogger Toby Elkington at Flavoursome Feast.
“The braised beef burger really stole the show.…who knew beef could melt like that with deep and exciting smokey flavours.” Blogger Harriet Ruff at The Sunnier Side Up.
“My absolutely favourites were the melting pulled pork chilli con carne with sour cream and the heavenly mash.” Blogger Emily, from Recipes and Reviews.
“As the good quality vanilla ice-cream started to melt into that sauce I was reflecting there was no more pleasurable experience available in Leicester that night.” Blogger Tim Burke from www.riponia.wordpress.com
The Smokehouse is open from 6pm Tuesday to Saturday. For bookings, telephone 0116 255 8223 or to find out more, visit https://www.facebook.com/thesmokehouseleicester