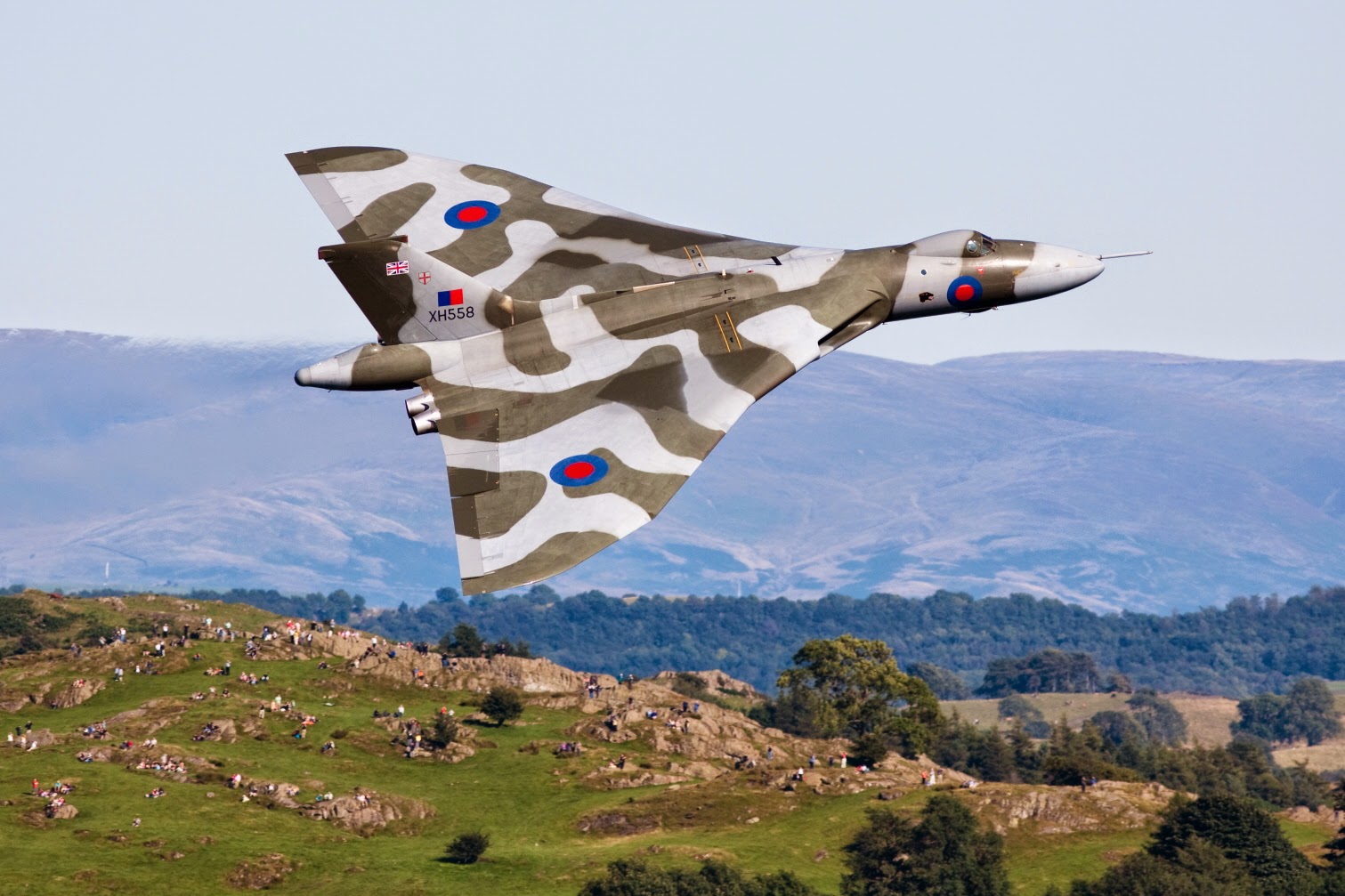 Nottingham-based Focus Consultants has been working with the Vulcan to the Sky Trust to undertake an options appraisal to identify the best possible future for the iconic aircraft Avro Vulcan XH558, The Spirit of Great Britain.
The Vulcan was flown by the RAF for 33 years between 1960 and 1993. She was built to deliver Britain’s first atomic bomb, ‘Blue Danube’, as a deterrent against Soviet aggression during the Cold War. Through fundraising and restoration work, widely believed to be the most complex technical heritage project ever undertaken, she was returned to flight in 2007 and has since performed in numerous air shows across the UK and Europe.
However, for a range of technical reasons, the aircraft is coming towards the end of its flying life. The Vulcan to the Sky Trust, which owns and operates the aircraft, is keen that there will be continuing public benefits once she has stopped flying in the form of education and inspirational activities around the aircraft aimed at helping to solve the shortage of engineers and technical staff that is currently a significant challenge for British businesses.
In recognition of this, the Vulcan to the Sky Trust has been awarded £10,000 funding from the Heritage Lottery Fund’s Start Up Programme to identify the most effective future role for the best conserved large British aircraft of her era after she is grounded.
For the last three months, Focus has been working with the Trust to examine a range of options which will allow the Vulcan to maintain the value endowed upon it by the public and enable her to continue to deliver substantial public benefit.
Dr Robert Pleming, chief executive of the Vulcan to the Sky Trust said: “We are thrilled the Heritage Lottery Fund has recognised the potential of Vulcan XH558 to bring value to our economy and pleasure to the public even when she is no longer flying.  We have been working with Focus to look at how XH558 can continue inspiring young people with the excitement of engineering and innovation, helping to solve the UK’s technical skills shortage.”
Associate at Focus, Heather Frecklington, said: “The Vulcan has incredible significance, as a powerful reminder of the knife-edge tension of the Cold War, an innovative engineering triumph and a symbol that continues to pull on the heart strings of the British public. It is essential that her revered position is maintained once she has been permanently grounded and is not lost for future generations.  At Focus we are proud to be working with the Trust to identify an option that not only ensures her survival in outstanding condition, but also ensures she continues to inspire and benefit the public who have shown boundless support for her hitherto.”
The Vulcan is currently based at Robin Hood Airport, Doncaster.
Focus, which is celebrating its 20th anniversary during 2014, offers a range of services in the heritage and development sector, including funding and economic development, regeneration expertise, energy consultancy and chartered surveying services.
Since its creation in 1994, Focus has secured more than £925 million of grant assistance and delivered more than £1 billion of projects and programmes - making it one of the most successful businesses of its kind in the country.
It has worked on a range of high-profile projects in the arts, heritage and tourism sector, including some of the major museums across the UK, and important historical and ecclesiastical sites.
As well as its head office at Phoenix Business Park in Nottingham, it also has branches in London, Leicester, and Boston and Aubourn in Lincolnshire.
For more information visit www.focus-consultants.co.uk
Press release issued by Nottingham PR company Perfect 10 PR www.perfect10pr.co.uk

Nottingham-based contractor J Tomlinson was in the driving seat of a delicate relocation operation to move the world’s fastest car Thrust SSC into its new home as part of a development project at Coventry Transport Museum.
Thrust SSC is being given pride of place in an all-new ‘Biffa Award Land Speed Record Gallery’, which is set to open in early 2015.
As part of the daring relocation manoeuvre, the 54ft long, 10-tonne supersonic car was hoisted over the rear gates of the museum, before being transported to a low-loader lorry and driven at walking pace around the outskirts of the building. The vehicle, which measures almost the same length as two double-decker buses laid end-to-end, was then once again lifted in the air on a crane and placed into position just outside the new gallery, at the front of the museum, before being manoeuvred into the brand new exhibition space. Thrust SSC’s predecessor Thrust 2 had been moved in the same way just minutes before.
J Tomlinson is the contractor for part of the £8.5 million redevelopment of Coventry Transport Museum, which got underway in April this year and is due to be completed by Summer 2015, when 12 of the museum’s 14 galleries will have been transformed, giving visitors a fresh perspective on Coventry’s fascinating transport history.
Martin Gallagher, construction managing director at J Tomlinson, the company tasked with managing the base build works and moving the Thrust vehicles, said: “Transferring these two very special cars into their new home was not only a unique operation for J Tomlinson, it also marked a key point in the extension and refurbishment of Coventry Transport Museum.
“Thrust 2 and Thrust SSC are the two fastest cars in the world, and we are very pleased to have been part of the team that has created a new, prominent gallery for them so that they can be displayed in all their glory. We will now begin work on the area that these cars previously occupied, as J Tomlinson continues the development of the home of this internationally significant transport collection.”
Gary Hall, chief executive at Culture Coventry, the trust which runs Coventry Transport Museum, said: “This was a fantastic moment for everyone involved. Thrust SSC has lived permanently at Coventry Transport Museum since it was acquired in 2001, four years after it smashed the World Land Speed Record in the Black Rock Desert – and this was the first time it had moved since its arrival.
“We are absolutely thrilled to be giving both Thrust SSC and Thrust 2 a new home in their own specially designed Biffa Award Land Speed Record Gallery, where they will be joined by an all-new 4D Land Speed Record simulator – the whole thing is set to be a real ‘WOW’ for visitors old and new.”
The relocation manoeuvre was managed by Leicester-based MFH Construction Projects, and the moves were undertaken by Collett & Sons Ltd, a Halifax-based company specialising in transport, heavy lift, marine services and transport consulting.
Visitors will be able to see Thrust SSC and Thrust 2 in their new Land Speed Record Gallery from February 2015 onwards. The new gallery has been supported by Biffa Award, a multi-million pound environment fund managed by the Royal Society of Wildlife Trusts (RSWT), which utilises landfill tax credits donated by Biffa Waste Services.

Staff at Croots Farm Shop will be raising money for Derbyshire Children’s Holiday Centre during the festive season by raffling off a large chocolate snowman.

The farm shop near Duffield has supported the charity, which helps disadvantaged youngsters, for a number of years.

“Derbyshire Children’s Holiday Centre was established in 1891 to provide disadvantaged Derbyshire children with holidays in Skegness, and our customers have been very generous in the past with their support,” said Steve Croot, owner of the farm shop, which is based at Farnah House Farm, Wirksworth Road.

Croots Farm Shop is open daily from 9am to 5pm (Shires Eatery until 4.30pm). Croots runs Fresh Fish Thursdays between 9am and 1pm on Thursdays.